Get into the adventure of Scuba Diving In Andaman!

Feel The Rush ​o​f Adrenaline In Andaman And Nicobar Islands If you are one of those people who love to feel the adrenaline rush through your veins then these islands of Andaman and Nicobar are the place to be. There are a number of adventure sports available on these islands for you to choose from. Whether it is plunging deep into the sea, snorkeling on the surface or just camping and enjoying the nature, they have it all. Given below are some of the most famous and widely available sports on these islands.

The Andaman Islands are probably the only place in all of India that offers Scuba Diving. The islands are home to a rich coral reef ecosystem in the world and hence diving here is an experience of a lifetime. What sets these corals apart is that they have remained untouched by human activity and hence have remained undamaged. The period between December and April is considered to be the most ideal season for diving.While diving in these waters you are most likely to find hammerheads, leopard, nurse, white tip and grey sharks. Manta rays are also visible though not regularly. Havelock has always been the best place to scuba dive and continues to be so.

The Andaman and Nicobar Island surely is the land of paradise where you get to experience some of the finest adventures here, which include water sports. These are a group of more than 572 Islands that have abundant of rocks and islets. These Islands are situated in the Bay of Bengal in the south east to the Indian mainland. These Islands stretch over 700 kms from the north to the south. Some of the large Islands present here are the middle Andaman, south Andaman, baratang and the little Andaman Islands.​ ​The richness in the aquatic life of Andaman is what makes it a popular place for tourists. Many tourists are dying to see what it feels like to be underwater. We have a lot of experience being on land but venturing into the depths of the water is something unique and different. The coastal water that surrounds these Islands is what makes it the abode of coral reef. Moreover, the formations underwater is totally undamaged by human activity.

If you are considering Scuba Diving in the Andaman and Nicobar Islands, then the best time is usually from December to April. All you need to do is to get some Scuba Diving equipment's from a dive shop that sells a good quality of diving equipment's to make sure that your safety is ensured. You can also get a standard renting gear at the best costs and experience the adventure underneath. These equipment's include balanced regulators, open heel fins, masks, shoes, web suits, sea quest BCDs, etc which will protect you from any danger and ensure safety as you dive.You can also get an underwater digital camera for rent if you wish to keep some of those unforgettable memories.

Andaman Bluebay Holidays is a complete T​ravel​ M​anagement​ C​ompany​ teamed by hardcore professionals & the leading travel and tour operator in Andaman Islands, India. Our core competence lies in ground handling of tourists visiting the place (Business & Leisure both), no matter how logistically difficult the reach be to far flung island, we play hard to cater the clients requirements. We cater Holiday Tour Packages to Port Blair and other nearby Islands. Offering our services to Corporate and Retail segment including Foreign National, Indian, corporate, Leisure travelers, Holiday Crunch and others (including other travel companies). We offer tour packages and arrange customized trips, hotel bookings, Air Ticket bookings, and Scuba Diving, Snorkeling, Sport Fishing and car rental arrangements in Andaman's.

We strive to deliver you the best travel services today in Andaman's. The head office is at Port Blair and a network of travel associate offices throughout the islands manned by professionals. The company is associated with leading hotels and resorts in Andaman Islands enables us to give our clients the best of the services.
The firm is registered (Reg:-No-3641/LC/2011) and also is a member of (ATO) Andaman Tour Operators Association, Port Blair, Andaman and Nicobar Islands & in All India Companies Act.

Since pre-historic times aboriginal tribes have lived on these Islands. The Andaman group is inhabited by tribes of Negrito origin, while the Nicobar Islands are inhabited by tribes of Mongloid origin. There are 4 tribes in the Andaman District and they are Great Andamanese, Onges, Jarawas and Sentinelese, while 2 other tribes, Nicobarese & Shompens of Mongloid origin live in Nicobar district. The topography of the Andaman islands is hilly and they abound in evergreen forests. Timber is plentiful and of a vast variety. These undulating islands are covered with dense forests and endless variety of exotic flora and fauna. However, the Timber of Andaman & Nicobar Islands cannot be commercially extracted due to the order & ruling of the Supreme Court of India.The reserved and protected forests extend over 86% area of the territory and the forest cover is more than 92%. About 50% of the forests has been set aside as Tribal Reserves, National Parks and Wildlife Sanctuaries.Mythologically, the name Andaman is presumed to be derived from Hanuman, who was known to the Malays as Handuman. Since pre-historic times, these islands were the home of aboriginal tribes. The first settlement by the British took place in 1789, which was later abandoned in 1796. The second settlement was basically a penal settlement, established in 1858, after the First War of Indian Independence, followed by the settlement of convicts, Moplas, some criminal tribes from Central and United Provinces, refugees from erstwhile East Pakistan, Burma and Sri Lanka as well as ex-servicemen. People of all faiths like Hindus, Muslims, Christians, Sikhs, Buddhist etc., live together in complete peace and harmony. Inter-religion and inter-regional marriages are common. This amazing racial and cultural mix is correctly described as Mini-India. The sandy beaches of Andaman & Nicobar Islands are fringed with coconut-palms. The sea around the islands offer excellent scope for water sports. Adventure tourism like trekking, Camping, snorkeling, scuba diving etc., are the real attractions.A visit to the Andaman & Nicobar Islands is a memorable lifetime experience. The Indian government is trying to develop the Andaman Islands into a low volume, high yield tourist zone. To promote eco-friendly tourism, the Andaman and Nicobar Administration is developing 36 beach sites on the islands. India’s first ever marina is to be developed in A&N islands.The Government is starting unique projects like introduction of seaplane service for the first time in India. The administration will set up canopy walkways, luxury cottages, and procure luxury boats to attract high-end tourists. Plans are afoot to start more sound and light shows and setting up de-compressions chambers for scuba drivers in the islands in the near future. Annual tourist arrivals at the Andaman & Nicobar Islands increased to 130,000 in 2009 as compared to 33,716 tourist arrivals recorded in 1990. 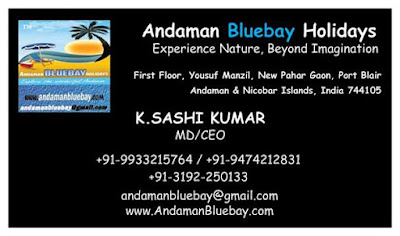 Posted by Digital Andaman at 13:14 No comments:

30 Best Tourist Places and Attractions in Andaman and Nicobar Islands

If you are imagining the white sandy beaches in the Emerald isles kissing the crystal clear cyan water then Pardon Me!!! You don’t have any other option other than the archipelago of Andaman and Nicobar. These islands can even change your lewd mood to an adventurous one as they provide you a host of splosh-gosh pelagic activities. And then you are out in the heathen emerald world… and your Jove-dove-judo persona will seethe to a treasure trove perk just when you enter the battle history of the ill-reputed ‘Cellular Jail’, which is now a World Heritage site and a memorial to the prisoners (freedom-fighters) of the Indian Independence Movement.
The indigenous cultural life of the original inhabitants lacks having a halo of vehement apostasy. Some of the tribes have become extinct because of unregulated deforestation and few others, the Jawara and the Sentinelese, have spawned to be of knockdown-dragout nature to survive against the outside world and few having assimilated into the contemporary Indian society. The other inhabitants living in the heathen hone harmony are the Indians and immigrants of Myanmar and Sri Lanka. A treasure chest is simply waiting for you to be discovered in these mystic islands.
Amidst the sylvan ambience rejuvenate once again out from the wonky-wispy imagery and trail to the salmon shoal of coral reefs and adhere the colorful world of sprinkling hues including dolphins and varieties of turtles like The Green Sea Turtle, The Hawksbill Turtle, The leather Back Turtle and The Olive Ridley Turtle. If you are of sposh-gosh nature then you are just about to be entertained by jellyfishes and poisonous sea snakes like Laticauda colubrine and Sea Krait. These reptiles are the “Reel Life of Andaman”.